Ceiling fans are an excellent way to help keep air conditioning energy costs down while maintaining occupant comfort levels. During milder weather, ceiling fans can help keep occupants cool without running the air conditioner, due to the “wind chill” effect. Moving air feels cooler because it speeds the evaporation of moisture from the skin, removing heat. In summer, the fan should be set to blow downward, toward the occupants.

Fans can also be used along with the air conditioner to help reduce energy costs. The cooling effect of the moving air allows the air conditioner thermostat to be set slightly higher while maintaining the same degree of comfort for room occupants. For example, you may be able to adjust the setting on your thermostat from 76° to 78° F and still be just as comfortable. This increase of 2° F can result in a reduction of up to 15% in air conditioning energy use, and the cost of running the ceiling fan is minimal.

Remember that fans don’t actually cool the air – they make it feel cooler. Running ceiling fans or other fans in unoccupied rooms doesn’t help and it’s a waste of energy. 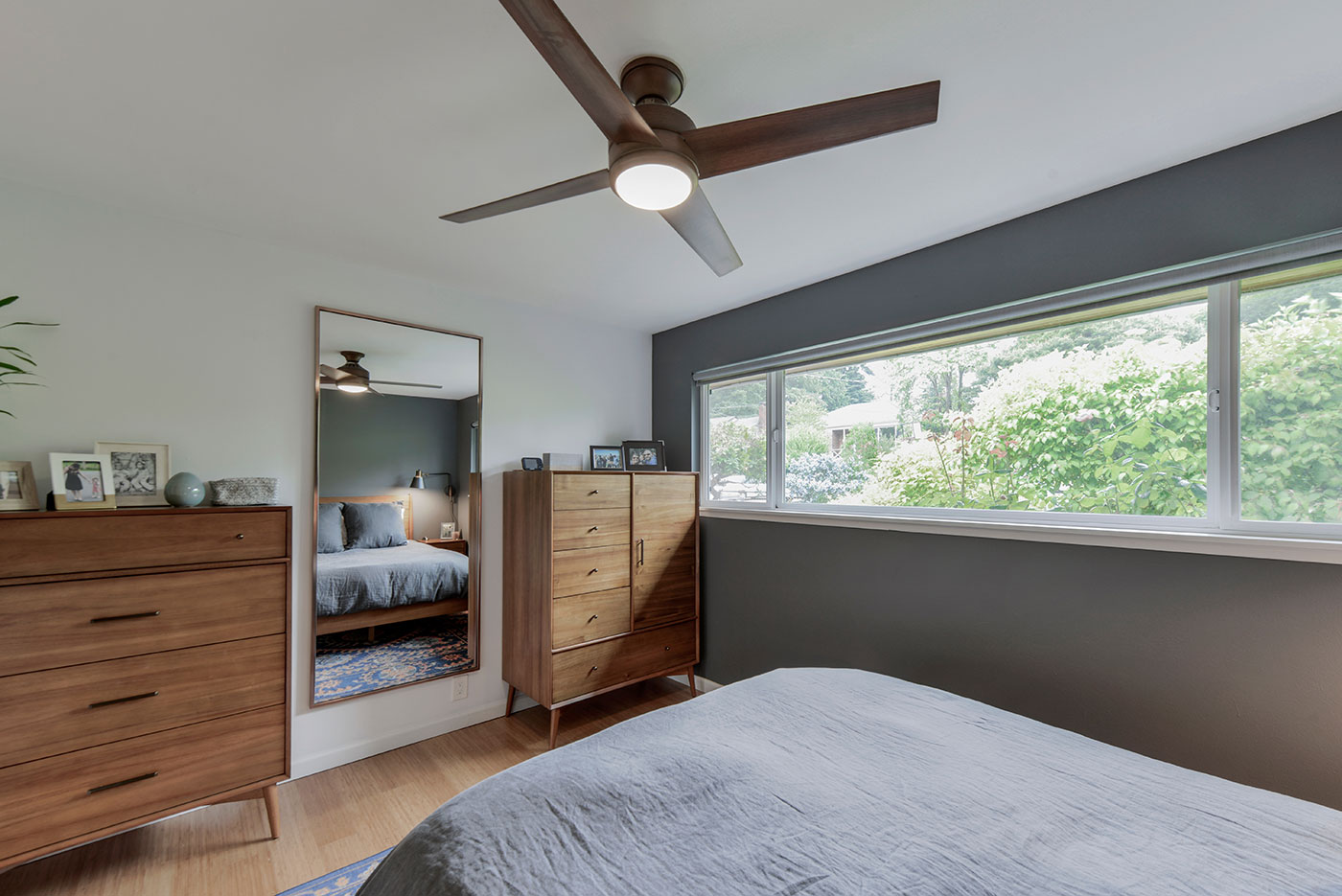 Stay Cool for Less Money with a Ceiling Fan

Did you know that a ceiling fan could allow you to raise the thermostat setting about 4°F without affecting your comfort? Fans work by creating a wind-chill effect on your skin so you feel cooler. Raising the temperature and using a fan can help you use less energy running your air conditioner; you may even be able to avoid using your air conditioner altogether.

Follow these tips when installing and using a ceiling fan:

How to Select a Ceiling Fan

Almost any home can be made more energy efficient by installing a ceiling fan or two if you don’t already have them. Here are a few suggestions to keep in mind when shopping for a new ceiling fan.

Basic physics: If your fan’s blade angle is less than 12 degrees, it’s a waste of energy.

The very first thing you should look at with a new ceiling fan is the blade angle. If the angle is less than 12 degrees, the fan will be largely decorative and will just eat energy without significant air movement. Ideally, you want the blades to push air upward or downward. If your blades are at a low angle (meaning nearly flat), they won’t do either – instead, they’ll have much the same effect as an airplane wing. They’ll just cut through the air without pushing the air at all.

A 12-degree angle should be the minimum you purchase, and ideally you’ll buy one with a higher-degree angle. Blades with a 16-degree angle or above push a lot of air, feeling much like a box fan attached to your ceiling. That’s great for cooling off, but it might be overwhelming in some situations. Get a fan with blades angled between 12 and 14 degrees in a room where you might have papers out or may otherwise not want a strong breeze. But in general-use rooms, aim for a fan whose blades are angled at 14 degrees or more.

Put your window coverings to work

One of the simplest ways to help beat the heat is to keep your curtains and blinds closed during the day when the sun is at its hottest. If your windows are older or your home gets a lot of sun, the heat gain through the windows can greatly contribute to the indoor temperature. Closing curtains and blinds will help keep the room cooler and your energy bills lower. It’s not rocket science, but it works.

Invest in a programmable thermostat—and use it properly!

Using a programmable thermostat is a great way to make sure your home stays cool while you’re there to enjoy it, but that your air conditioner isn’t working overtime when you’re away. If you have a fairly regular schedule, it’s easy to set your thermostat for your home to be warmer when you’re not there, but have it kick on so that it’s cool and comfortable by the time you walk in the door. And if you use a ceiling fan, you may be able to set your thermostat a few degrees higher without the room feeling warmer, which saves even more.

How do ceiling fans work for colder weather?

Using a ceiling fan in the winter may seem counterintuitive, but it could save you as much as 15 per cent on your heating bills. Your ceiling fan can help distribute and maintain heat pumped out your furnace. In turn, you can adjust your thermostat to a lower setting, but still keep warm and save on your heating costs.

In cooler months, your ceiling fan should be spinning clockwise at a low speed. Warm air naturally rises, and the gentle updraft created by this setting allows for the redistribution of warm air that tends to accumulate near the ceiling.

Many Ways To Do Packing Services

Must Use Tax Planning For Your New Company