Do Not Affraid Of Scorpion

Scorpions are nuisance pests that are closely related to spiders, mites and ticks. There are about 1,200 scorpion species in the world and 70 species in the United States. Of these, the most dangerous species is the Arizona Bark Scorpion, which is found in the American southwest and in Northern Mexico. Keep reading to learn more facts about scorpions.

Scorpions are nocturnal pests, so they hide during the day and are most active at night. They feed primarily on insects, especially crickets and cockroaches, and they also feed on spiders. However, they can survive for months without food if water is readily available

Scorpions live in dry habitats, usually preferring deserts and semi-arid regions. Many species dig burrows in the soil and hide under rocks, logs or debris. During periods of hot weather, scorpions may enter homes through wall voids and take shelter in cool, moist areas like crawl spaces and attics

While sometimes referred to as a “scorpion bite,” scorpions actually sting as a defense mechanism or as a way to kill prey. Humans will usually experience mild symptoms that are similar to that of a bee sting, such as temporary pain, a burning sensation or localized swelling. However, there are a handful of species around the world that possess more dangerous venom, which can be potentially fatal to humans. The Arizona bark scorpion in the U.S. can deliver such fatal stings.

The key to preventing scorpions is to eliminate harborage sites around the property including woodpiles, trash and debris. Homeowners should remove stones and landscape timbers from the property, and store firewood at least twenty feet from the home and five inches up off the ground. 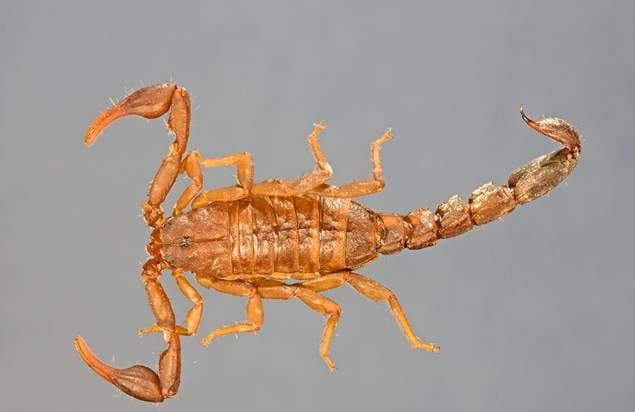 Tips to Keep You Scorpion Free

work with a lot of people relocating from out of state, or even out of country, and I feel like it’s part of my job to help them settle into their new life in the desert.  And guess what!  Scorpions are a creepy, crawly, fact of life here in Arizona.

But do they really live up to all the hype?

In this post, I’ll give you a little information on scorpions in Arizona as well as 5 tips to keep your home scorpion free! Oh and at the end of this post I’ll also share a bonus tip of the one thing I personally do EVERY SINGLE DAY to prevent scorpion stings, so, stick around! We get a lot of questions about bugs and other critters from people thinking about moving to Arizona, and we’ve even been asked to make a video on it.  To be clear, we don’t love bugs and we are NOT entomologists…we’re REALTORS®, but we love our subscribers SO MUCH that we didn’t want to disappoint.  I mean we had to research this stuff and there were pictures…eek!  So anyways, you asked for it, here’s your video on scorpions in Arizona and how to keep your home scorpion free.

So, that was fun, right?  Okay, now that you have all these facts and you’re sufficiently freaked out, I bet you want to know how to keep them OUT of your home.  Truthfully, these facts make them seem a lot scarier and a lot more problematic than they really are.  If you follow these 5 tips you probably won’t see many, if any, scorpions in your home.

There are many excellent pest control companies, just pick one and treat your home and yard monthly.

It’s amazing just how many holes and spaces a home can have. There are cables, vents and outlets that often require a hole in the wall. Often, this leaves just enough space for an arachnid as skinny as a scorpion to get inside.  Holes in the foundation, siding, roof, windows, walls, or screens are also enough to allow a scorpion an easy way to access your home.  Although a scorpion in your house may seem huge, I mean, I’m pretty sure the last one I saw was THIS BIG, but truthfully they are pretty tiny and a small hole is enough for them to get in. 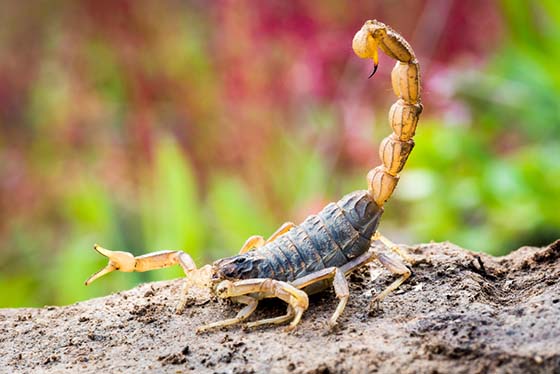 How to Keep Scorpions Away from Your Home and Yard

Prone to scorpions? Scorpions will only come into your yard or home if they can find prey, like spiders and crickets. The best way to get rid of scorpions is to prevent their prey (food source) from living in your home, yard, or building.

Practicing general pest prevention is always a good idea, even more so if you are prone to scorpion, spider, and cricket infestations. Simple yard maintenance will make your property less attractive to scorpions and their prey, decreasing your chance of being stung.

If you live in an area that is prone to scorpions and have seen scorpions on or around your property before, practice the following steps to prevent a scorpion sting

We hope you have found this guide to scorpions helpful. If you are not sure if you have seen a scorpion, read our guide on what scorpions look like. Where scorpions hide will help you find a scorpion infestation in your home and how to get rid of scorpions will teach you how you can do your own scorpion treatment.

Scorpions have existed for 350-400 million years. They were one of the earth’s first arthropods. They are commonly found in deserts, but are present in grasslands, savannahs and certain forests as well. Scorpions have even been found under snow covered mountains.  There are approximately 90 different types of scorpions living in the U.S. All but four of these live west of the Mississippi River.

Scorpions have long, segmented bodies that are divided into 2 sections: The body and the tail.

The venom of scorpions is used both for prey capture and defense.  Their venoms are complex mixtures of toxins, which affect the victim’s nervous system, and other substances. Each type of scorpion has its own mixture. Although these creatures have a bad name, only one species in the United States has venom strong enough to seriously harm humans.

Scorpions do not nest, so it is hard to treat them with insecticides. If you use chemical control, be sure to follow the instructions on the label. One of the best ways to control scorpions is to capture them, but you must be careful. Scorpions glow under a black light, so you can use it to find where they are hiding. To be safe, where boots and gloves.

How To Avoid Being Stung

Scorpion are active at night, so there are more chances to get stung after dark.  Be careful around cracks or plants where scorpions tend to hide.  Scorpions are most often found in dark places when indoors.  Always check the inside of  shoes, closets, cupboards and beds.  Be sure to shake any clothing before putting it on and wear socks and shoes when walking around at night

Scorpions are arachnids. They are close relatives of ticks, mites and spiders. There are approximately 1,300 species of scorpions worldwide. They are characterized by an elongated body and a segmented tail that is tipped with a venomous stinger. Scorpions are very common in the Southern and Southwestern United States. Most scorpions in the United States are not poisonous, except for two species found in the southwestern states of Arizona, California, New Mexico, and Texas.

Scorpions have a long slender body with a five-segmented tail that can be arched over the back. Size varies between the various scorpion species, but most measure about 2 inches when fully grown. Their colors range from yellow, blue, reddish brown and black.

Most of the scorpions that enter dwellings are not poisonous; their sting is similar to that of bees or wasps. It’s usually better to assume that they are poisonous if you are unsure.

The Bark Scorpion is very venomous. If stung, call your local poison control center and go to the nearest hospital or personal physician for treatment. The venom of this scorpion may produce severe pain and swelling at the site of the sting, numbness, frothing at the mouth, difficulty in breathing (including respiratory paralysis), muscle twitching, and convulsions.

Although general pesticides do not do much in the way of stopping scorpions from entering your home, it can help to get rid of the smaller bugs that act as a food source.

Must Use Tax Planning For Your New Company

Must Know About Switches Installation For Your Safety